The transport of chemicals or proteins across the membranes of cells is a vital part of life. Chemicals may need to be released in order to send a signal to the cell next door, or sometimes, a protein must be relocate from inside the cell to sit on the cell membrane so it can do its job.

For this reason, the Sec/Munc18 (SM) family of proteins—involved in fusion between two membranes—are an essential for this molecular transport and play a key part of healthy cell function. These SM proteins are involved in neurotransmitter release in the brain and in the maintenance of glucose levels (i.e. by relocating the glucose transporter to the cell surface so it can pump glucose into the cell).

Within our cells, chemicals or molecules can be isolated from the rest of the cell contents by containing them within small membrane encapsulated vesicles. But the molecular mechanisms behind how proteins, including SM, coordinate the fusion of these vesicle membrane to the outer membrane of the cell, so that neurotransmitters or the glucose transporter can do their thing, is not understood.

Crystal structures of SM proteins alone, and in complex with their partner proteins are helping us to decode the complex mechanisms of the membrane fusion event. And the importance of research in this area is essential for the development of new treatments for neurological diseases or diabetes. Indeed, Randy W. Schekman, Thomas C. Südhof, and James E. Rothman were awarded the 2013 Nobel Prize in Physiology or Medicine for their discoveries on the protein machinery that regulates vesicle traffic, including the SM proteins! You can read more about their Nobel Prize and their research here.

SM proteins, such as Munc18-1 (or Munc18a) shown below, consist of three separate domains that fold into a U-shaped or arch-shaped architecture. Image generated by Pymol (using the coordinates from the protein data bank (accession code: 3PUJ).

This is the structure of rat Munc18-1 that was solved in complex with a portion of its partner protein, syntaxin (Sx). The structure was published in 2011 PNAS by a team of researchers from the Institute for Molecular Bioscience, UQ, Australia.

A total of 12 SM structures have been determined, either alone or complexed to a truncated protein partner or short peptide sequence. Click here for a review on the current structural information of SM proteins.

The human signalosome complex (also known as COP9 signalosome or CSN) acts like a police cop within our cells. Like a policeman, it has multiple jobs, from defense to development. In particular, it serves our cell by ‘policing’ the large quantity of proteins in our cells. If certain proteins get out of hand, Cop9 plays a role in their degradation or removal.

Cop9 is vital for maintaining normal cellular function. It coordinates around 20% of all protein degradation in the body. If the protein malfunctions, a whole range of problems can ensue. This may lead to problems during our development. Cop9 has also been linked to breast and liver cancer, making it an attractive drug target for novel cancer therapies.

Cop9 is massive. It contains eight individual domains (coloured separately below), six of which form a ‘horseshoe’ shape. Due to its massive size, Cop9 can perform a whole lot of different functions, and these individual functions are highly regulated. 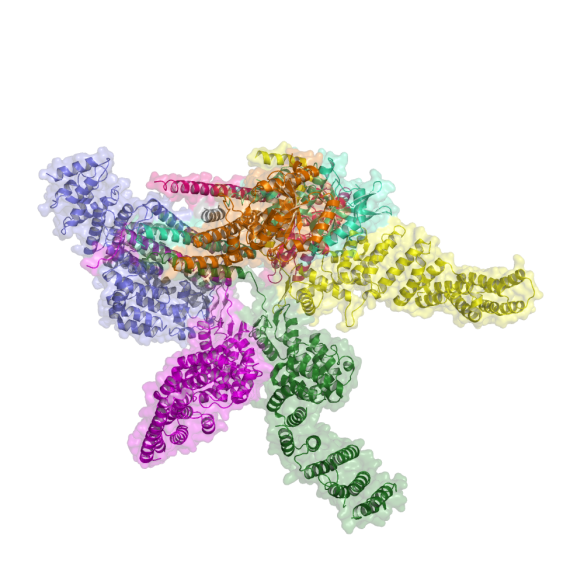 The structure of the human COP9 signalosome was determined by X-ray crystallography. Because it is such a large complex, this was not an easy feat. It required a team of dedicated and expert researchers. The structure was published only a few months ago (August 2014) in Nature (http://www.nature.com/nature/journal/v512/n7513/full/nature13566.html). This new structure provides vital insight into how the complicated protein Cop9 performs its duties.

Prion proteins play an important role in insulating our nerves ­­– maintaining the protective myelin sheath that surrounds them.

However, prion proteins can adopt two states: a folded form and a misfolded form. The misfolded form is the ‘bad’ one: it can assemble into a tough fibril, suffocating the neurons in the brain, and after many years, it will eventually cause death.

The misfolded form of the prion protein has been implicated in many human pathologies from Alzheimer’s disease to other neurodegenerative disorders.

This ‘bad’ form of prion is also the infectious agent in both Mad cow’s disease and the human variant of the disease, Creutzfeldt–Jakob disease.

What does the ‘good’ form of Prion look like?

The correctly folded form of the prion protein is made up of alpha helices as shown in yellow and purple below. This structure was first published in Nature Structural Biology in 2001 (http://www.nature.com/nsmb/journal/v8/n9/full/nsb0901-770.html#f1)

What does the ‘bad’ form of Prion look like?

When the prion protein misfolds, it can associate with other misfolded proteins, growing end to end to form a tough fibril. In 2008, we saw the first glimpse of how the misfolded protein can assemble together into this tough fibril that resembles something like an accordion.

You’ll notice this form of the protein consists mostly of beta strands (shown as red arrows). The hydrophobic parts beta strands of this misfolded protein enable the proteins to ‘velcro’ together into these large fibrous structures. These fibrils cannot be broken down, and instead form large deposits in the brain.

As the cow prion protein is very similar to the human prion protein, eating infected meat could mean that this Mad cow’s disease spreads to humans. Unfortunately, prions are not destroyed even if the beef or material containing them is cooked or heat-treated. But the parts of the cow with the highest concentration of this protein (brain and spinal cord) can be removed to reduce the chance of disease spreading to humans. Fortunately, to date, very few people have been diagnosed with the human variant of the disease (Creutzfeldt–Jakob disease)

This post will discuss conotoxins as a source of painkillers, as we continue to celebrate National Pain Week in Australia.

Cone snails (marine molluscs of the genus Conus) immobilise their prey by using a cocktail of peptides. These conopeptides or conotoxins from the venom of cone snails are active against receptors and ion channels.  Conopeptides are over 100 times more potent than morphine, and they lack many of the side effects of current treatments. One conopeptide (x- MVIIA which is marketed as Prialt or ziconotide) is currently available for the treatment of chronic pain, although many more are in trials.

These drugs still need to be injected, however, researchers are aiming to develop these compounds into an orally active pill or tablet form.

Here we are looking at the structure of an alpha-conotoxin (PnIB) from Conus pennaceus. This toxin blocks the nicotinic acetylcholine receptor at nerve cells and muscles.

Where did it come from?

The 1.1 Å resolution crystal structure of alpha-conotoxin PnIB was determined by researchers at the University of Queensland’s Institute for Molecular Bioscience and published in Biochemistry in 1998.

We have all felt pain when we cut our finger, or burn ourselves. This ‘feeling’ comes from the action of sodium channels sitting in the membranes of our nerves. Voltage-gated sodium channels (Nav) are essential the electrical impulses that transmit signals throughout our nervous system.

Pain is not always a bad thing in the body. It can act as a warning signal – reminding us to remove our hand away from the fire to prevent further damage to our body. But for some people, the pain never goes away. This type of pain is termed chronic pain. For these sufferers, currently available painkillers can become ineffective, leaving them with little options to manage their pain.

The bacterial sodium channel shown below is less complex than the human channel. But the structure does give us some information as to how drugs (anaesthetics and toxins) bind to the channel.

This is a side view of the bacterial sodium channel that sits in the membrane of the nerve cell:

This is a view from the bottom of the channel, showing the ‘central pore’ that sodium ions can move through: 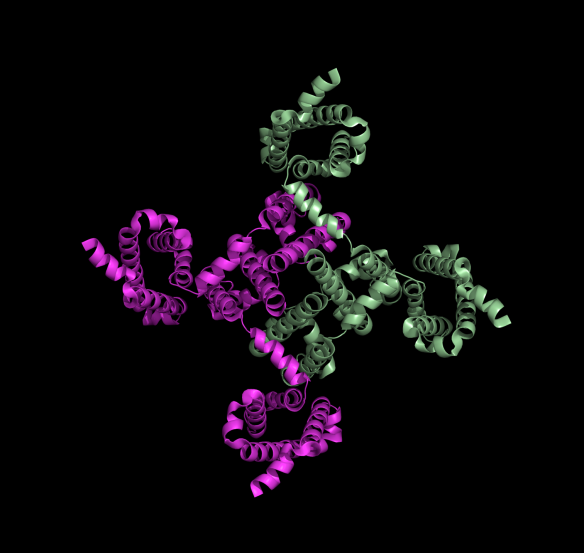 How do we use this structure to find more effective pain treatments?

Researchers are investigating toxins from venomous animals (snakes, spiders and cone shells) and plants as a source of painkilling molecules. This is because venoms have evolved over millions of years to target sodium channels – as this is the fastest way to incapacitate their prey.

Researchers from Australia (University of Queensland’s Institute for Molecular Bioscience) have found a number of new molecules that are potential analgesics from these venoms. For example, they have found a venom used by a centipede to paralyse prey contains a molecule more effective than morphine in blocking pain. This molecule is selective for Nav1.7 over the eight other channels. This selectivity is key – otherwise, we will get side effects because the other channels play important roles in heart and muscle function.

The crystal structure of a voltage-gated sodium channel from Arcobacter butzleri in its ‘closed’ conformation with four activated voltage sensors was determined to 2.7Å resolution and published in Nature in 2011.

How does the channel open and close?

In 2012, the structure of an ‘open’ bacterial form of the sodium channel was solved providing insight into how the channel opens and closes. For a movie of this see: http://www.nature.com/ncomms/journal/v3/n10/extref/ncomms2077-s3.mpg

In the next post, we will discuss some more about these toxins as potential analgesics.

Males have much higher levels of testosterone, and females are much more sensitive to this hormone. Not only does testosterone play a role in maturation of the male sex organs, it is important for general health, such as prevention of osteoporosis. It also has a positive effect on muscle mass and strength, leading to the sometimes inappropriate use of anabolic steroids in athletes.

The structure of human androgen receptor binding domain (blue) bound to testosterone (yellow) (pdb code: 2AM9) was determined in 2006 to 1.65 angstroms.

Where does the structure come from?

The structure described above was published in 2006 in Protein Science. For a detailed list of all available crystal structures of the androgen receptor, bound to differing ligands, see http://www.proteopedia.org/wiki/index.php/Androgen_receptor/.

Oestrogen is a steroid hormone that circulates in the blood stream and can pass through the membrane of our cells. Here, oestrogen can bind to and ‘activate’ the oestrogen receptor.  Once activated, the oestrogen receptor moves to the nucleus of the cell, where is acts as a transcription factor – that is, it can turn on the expression of certain genes that are important for development.

The oestrogen receptor is expressed widely in different tissues – from the ovaries to the kidneys, brain and heart. It is expressed in both males and females, although is present in much higher levels in females. Whilst oestrogen has a beneficial role in development and cell growth, it unfortunately can also cause cancer cells to proliferate. In fact, the oestrogen receptor has been implicated many cancers: from breast to ovarian, colon and prostate cancers. Oestrogen is thought to drive increased cell division, eventually disrupting DNA repair, and cell death, thereby leading to tumour formation. This has lead to the development of drugs for the treatment of cancer, including Tamoxifen, that block the action of oestrogen at the oestrogen receptor.

The structure of human estrogen receptor bound to estradiol (pdb code: 1A52) was determined in 1998 to 2.8 angstroms. The receptor functions as a dimer between two proteins (shown in pink). Each protein binds one molecule of estrogen (yellow). 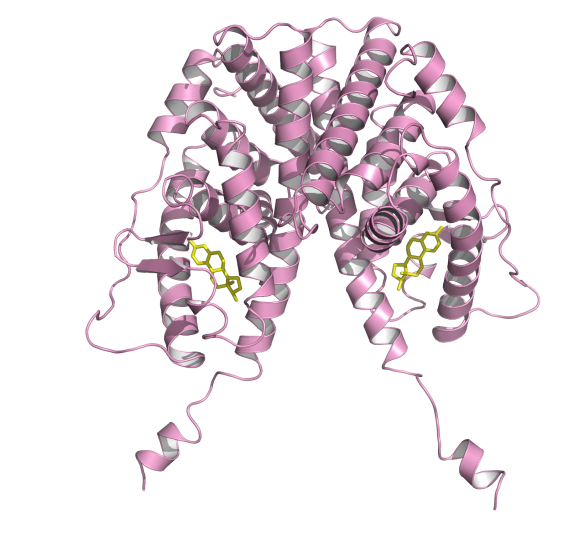 Where does the structure come from?